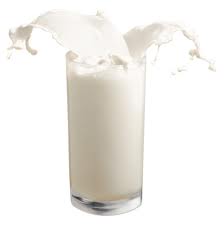 Now it is time to bring some enlightenment to the multiple negative reactions humans can have towards animal milk products. It is an important subject about which we constantly hear many confusing statements, with people swiftly mistaking the three main components of milk products: sugars, proteins, and fats.

It is mainly sugars, in particular lactose, that gives rise to intolerances; proteins such as casein, alpha-lactalbumin and beta-lactoglobulin that can generate allergies of different types; and fats rich in saturated fatty acids (mainly stearic acid and pentadecylic acid) and in trans fatty acids (cis-linoleic acid for example) along with cholesterol.

Let’s start with the fats. The excess of LDL cholesterol (but you need some to stay in good health regardless of what they tell you) and pentadecylic acid are considered as atherogenic, at least indirectly. But in contrast, the stearic acid doesn’t appear to be harmful and the conjugated linoleic acid (CLA) can even be useful for our health even though it is a trans fatty acid. This is in stark contrast to the trans fatty acids created artificially by the overheating and hydrogenation of vegetable oils, which are extremely toxic for humans.

Mammal milk contains a complex mixture of various proteins, and consequently multiple antigens (at least one hundred can be counted!) which can be at the origin of allergies, being either of the immediate reaction type (IgE antibodies), or delayed reaction type (IgG antibodies). The caseins of animal milks differs significantly from human milk, hence their allergenicity, while the beta-lactoglobulin doesn’t even exist in maternal milk as this gene doesn’t belong to the human genome.

Indeed, cow’s milk has more protein than human milk, the latter being a lot sweeter due to its richness not in lactose but in oligosaccharides which are small complex sugars that promote the growth of the bifidobacteria of the newborn intestinal flora (bifidogenic factor). Goat’s milk and ewes milk are intermediaries, with more whey than cow’s milk and therefore closer to human milk, which of all the mammal milks contains the most whey (a mixture of proteins, often beneficial) including alpha-lactalbumin.

This explains the excess allergenicity of cow’s milk, less so of goat’s milk, and even less for ewe’s milk even when we find considerable individual variations. The allergenicity is reduced if we hydrolyse these proteins, hence some hydrolysed hypoallergenic baby formulas for new-born infants.

The explanation as to why frequent allergy to the proteins of cow’s milk is seen is because they are introduced too early in the baby’s diet. In contrast, in the last century, breast feeding was prolonged and they also had wet-nurses. In the 6 to 12 months of early life the intestinal mucosa remains abnormally permeable to allow the protective antibodies of maternal milk (antibody IgA, absent from cow’s milk) to come to the rescue of the immature immune system of the new born, which is yet incapable of synthesizing them.  Everything is sorted out later, but too late for many babies that are allergic to cow’s milk ….and pureed banana!

Cow’s milk is abundant in lactose, a disaccharide (glucose + galactose) that can only be digested by the action of lactase, an enzyme (disaccharidase) secreted exclusively in the mucosa of the small intestine. When this is disrupted, for example by an episode of diarrhoea, we encounter difficulties in tolerating lactose for a few days, until such time that the brush border has recuperated.

Lactose intolerance simply reflects the lack of the enzyme lactase, only temporary in the case detailed above, but permanent for many Caucasians and for the immense majority of other populations of the globe for which it constitutes the rule and not the exception. It is not an allergy, there are no antibodies and no intervention of the immune system: it is indeed what can be properly termed an ‘intolerance’.

This is why all of those people who buy lactose free milks in order to escape the devastating effects of milk protein allergy make a huge mistake! One must admit that the marketing of these products is perverse because it addresses itself to all those people who do not digest milk, without any distinction….

To replace the animal milk for people with allergies, vegetable milks are a good option but you need to be careful of the high sugar content. Read the labels! It is better to use them in rotation and it is recommended not to abuse soya milk.